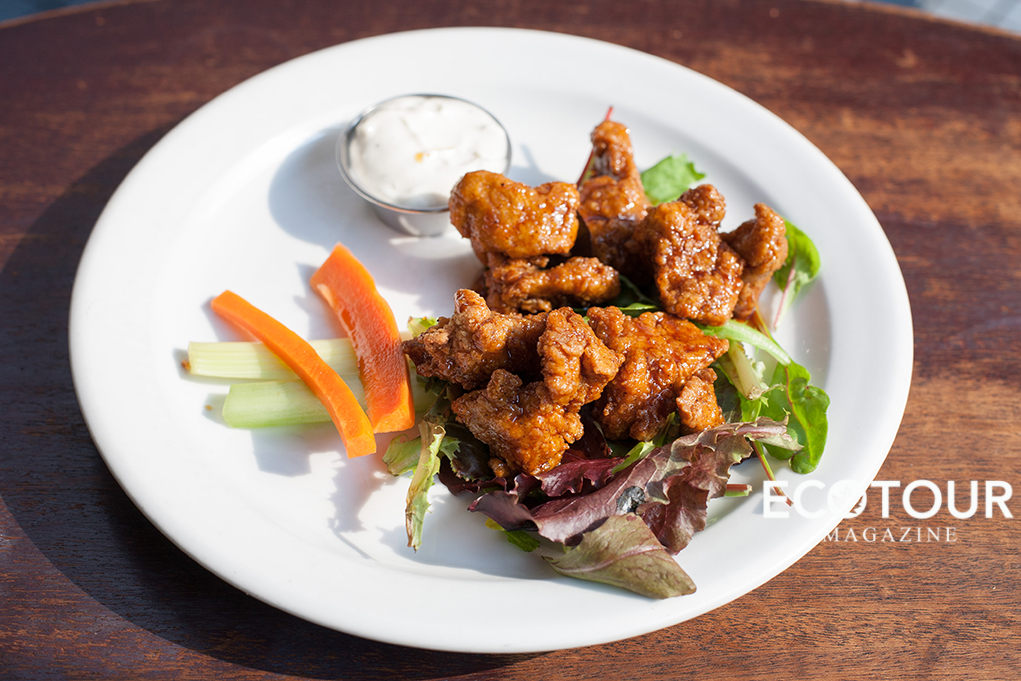 Some people may wonder what a vegan restaurant has to do with ecotourism or helping the environment, but reducing animal product consumption, in my opinion, is actually one of the most effective ways any single person can help. 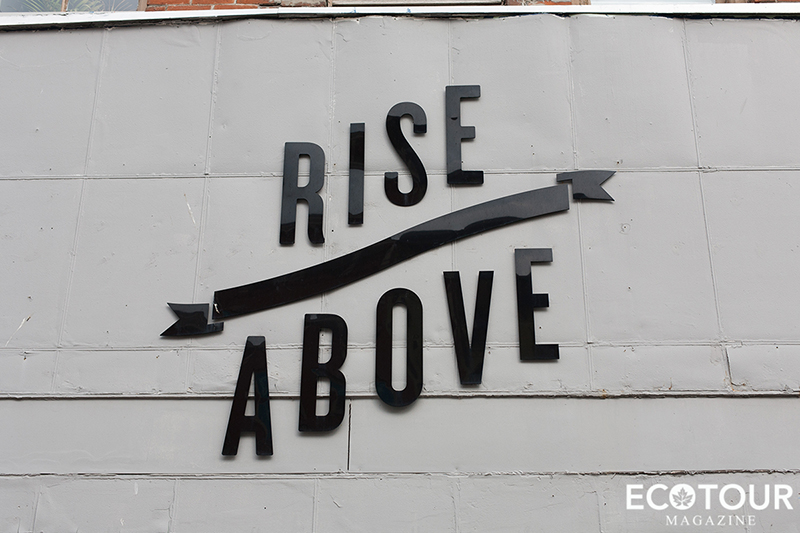 From chatting with Rise Above Restaurant & Bakery’s Owner, Brian Gasbarini, I could tell that protecting the environment and animal welfare were the main reasons he established the restaurant in St Catherines, Ontario:

“For me, the main advantages of a vegan diet for environmental reasons are water usage and land usage,” Brian said. 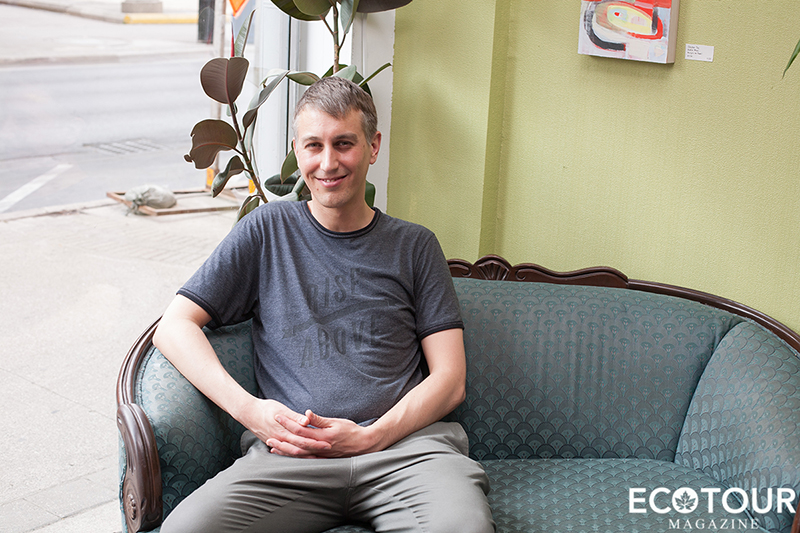 “Basically, what we are doing is mass breeding animals and creating a much larger population of those animals that naturally exist in the wild. So instead of feeding people directly, we’re feeding animals to feed people, which multiplies the amount of food and water we need by up to 10 to 16 times because we are filtering it through other species of animal. Secondly, livestock produces methane gas, which has a huge impact on global warming, much more significantly than carbon dioxide, so the fact that we are mass-producing animals that release methane is also contributing significantly.”

The restaurant has an independent, downtown café kind of vibe to it. 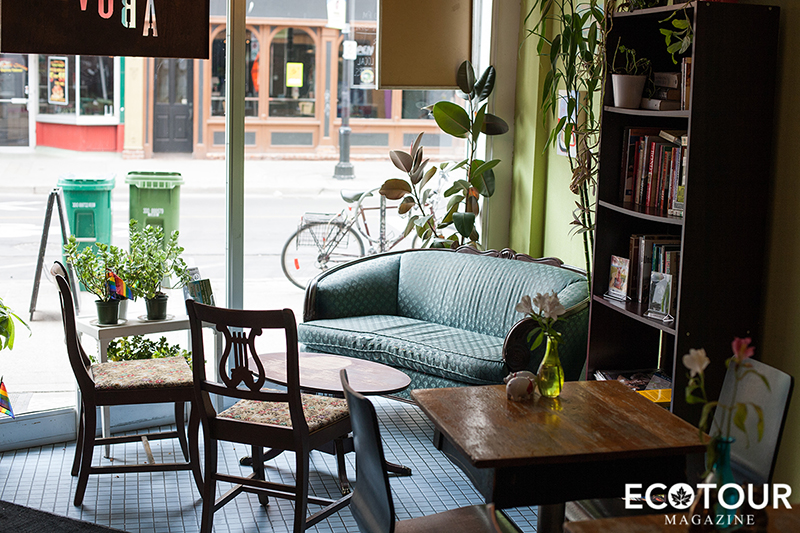 The walls are decorated with canvas paintings by local artists that are available for purchase. 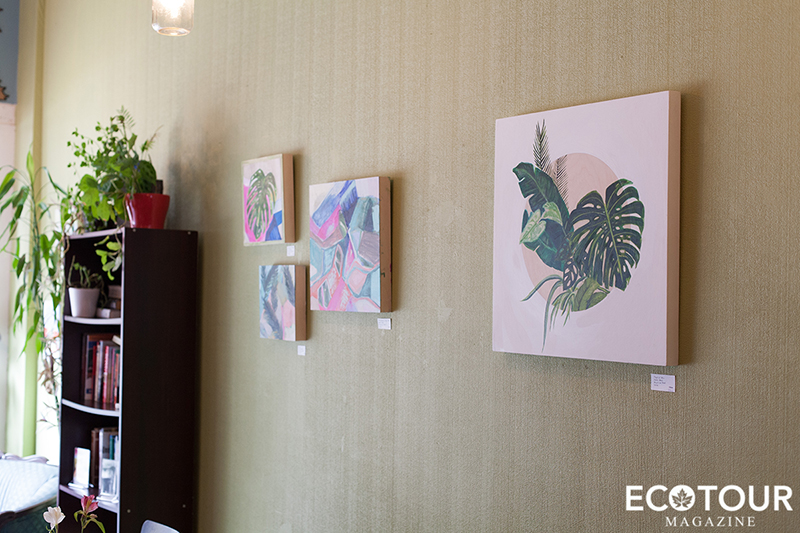 The Mantra, Reduce, Reuse Recycle, comes to mind, as they use glass Mason jars for serving different drinks, and even for holding some of the light bulbs. 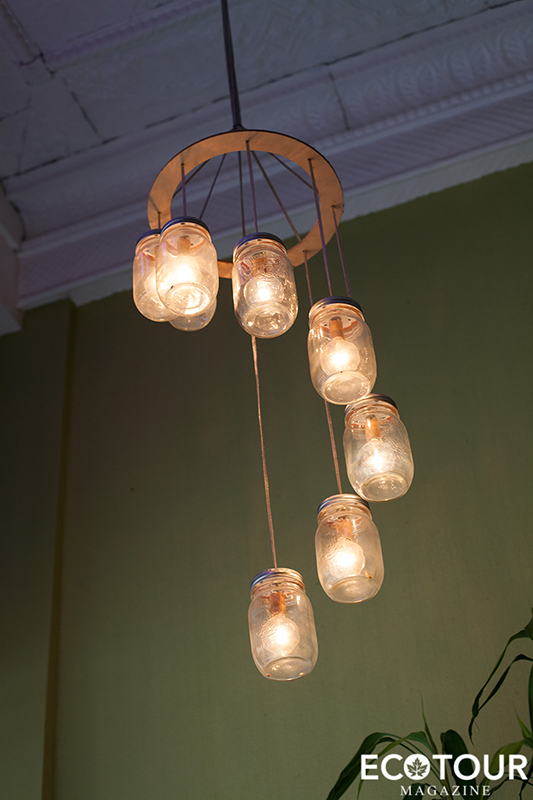 After a long hot day exploring the Niagara region, I enjoyed a berry smoothie with avocado, with a variety of antioxidant packed berries in it. It was very fresh and not sweetened like other smoothies I’ve tried. 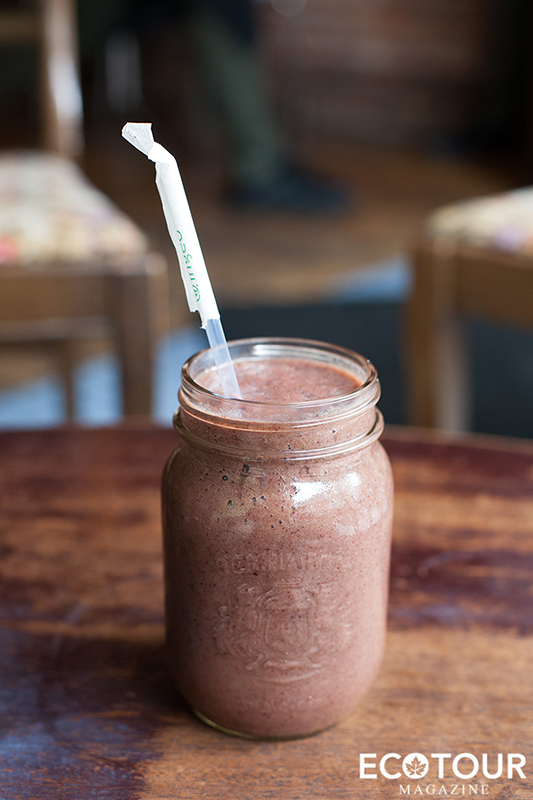 We also tried their popular meat alternative called seitan, which is actually gluten based instead of soy. I was pleased with the taste and texture of the seitan (all hail seitan!) and their delicious sauces did make it taste similar to chicken wings as they had intended with the dish. The dipping sauce that came with my side dish of veggies was creamy and light. 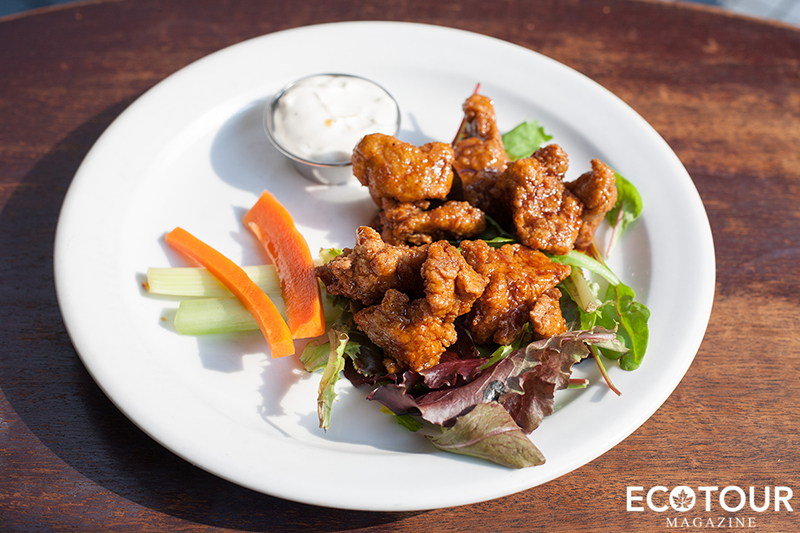 I do remember there being some gluten-free meal options and baked goods available as well. 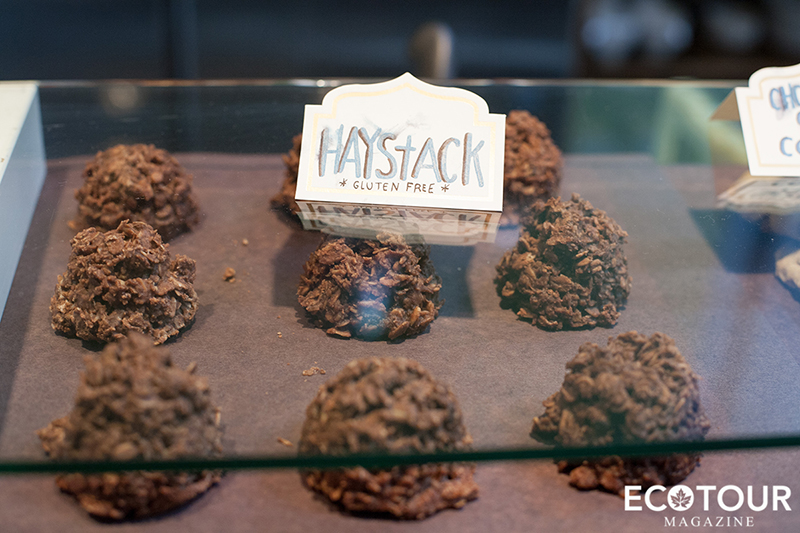 We also ordered gnocchi pasta, which was delicious and had a very soft delicate texture. It was covered in a cashew cream rose sauce with hints of zucchini ribbons and fresh basil. 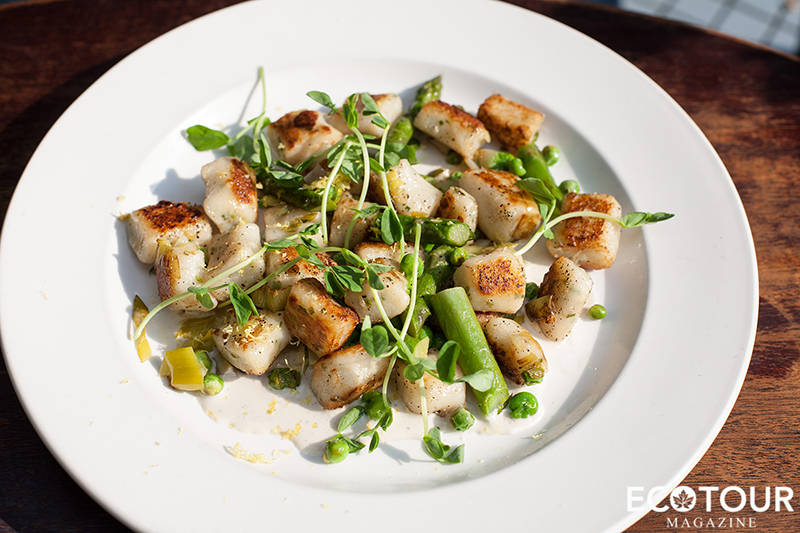 My bean and sweet potato based burger may have contained some soy but it was definitely not the main ingredient. It came topped with what looked like guacamole and vegan mayonnaise, which was very tasty. Overall it was a great healthy and satisfying vegan burger. It came with fried potato wedges, which seemed a bit out of place to me as it’s not quite so healthy but it is vegan. 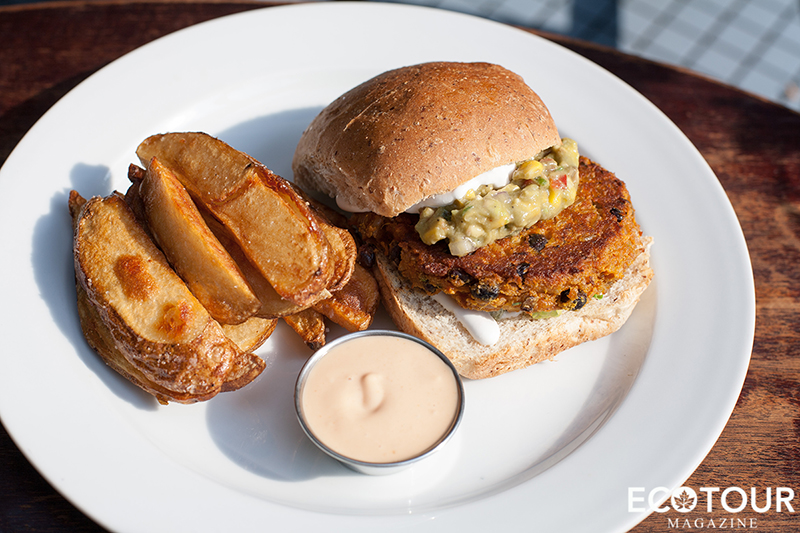 When chatting with Brian, this encouraged me to ask him about the restaurant’s health initiatives:

“We get a lot of people that come in here for health reasons,” answered Brian. “But honestly, fried seitan is not healthy – it’s deep fried, and desserts with sugar in them are not healthy.” 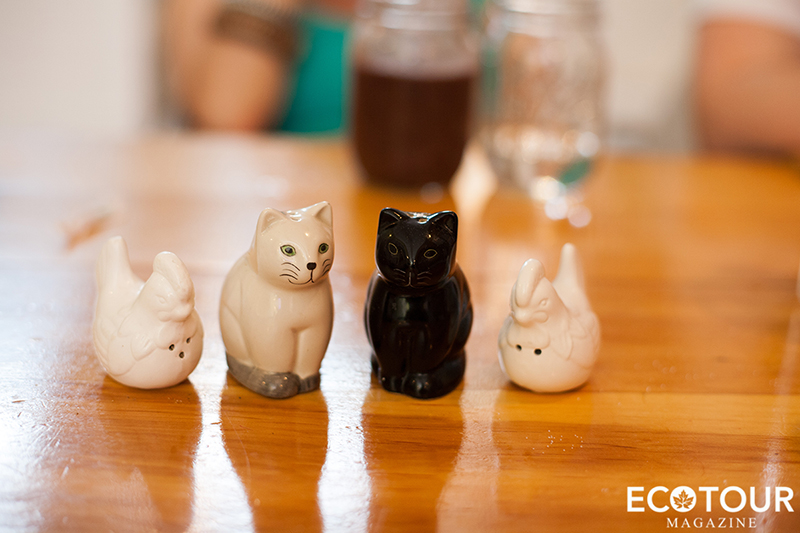 “For us it’s not about the healthy but about the ethics, and the fact we are removing animal products and making food more environmentally friendly, and less harmful to animals.”

“We don’t want to be just be one thing. Especially because we are located in a small city that doesn’t have other vegan restaurants. In a place like Toronto, vegan restaurants tend to specialize in healthy vs. comfort food. For us, we want to have a little bit of everything.” 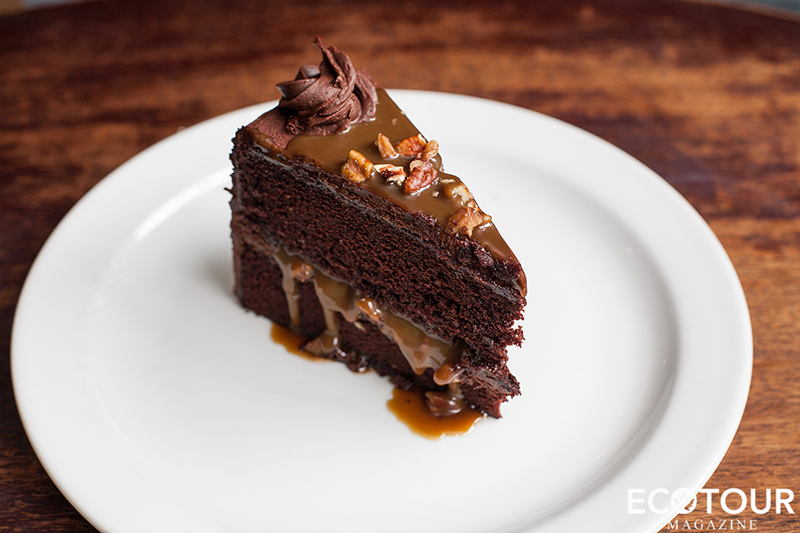 As the portions were large, we ended up ordering way too much food and had to take some to go. I noticed that they use cardboard boxes, which are biodegradable or recyclable. Sadly, many other mainstream restaurants still resort to using Styrofoam.

As for customer service, the staff was attentive and friendly, and I don’t recall there being any unacceptable delays at any part of our dining experience.

About Rise Above Restaurant & Bakery

Rise Above is an all vegan restaurant and bakery, located in the heart of downtown St. Catharines, Ontario. They specialize in comfort foods, healthy choices, and fresh baked desserts.

Remember that sharing is caring, and each article shared helps support our cause to raise awareness of eco-minded travel opportunities in Canada. 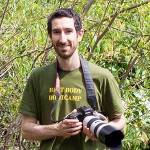 Ben captures travel photography in action for Ecotour Magazine, whether its zipping across a treetop canopy tour, climbing a hill, or meandering in a forest, Ben knows how to frame the shots while the team is discovering new places, laughing, and having fun. 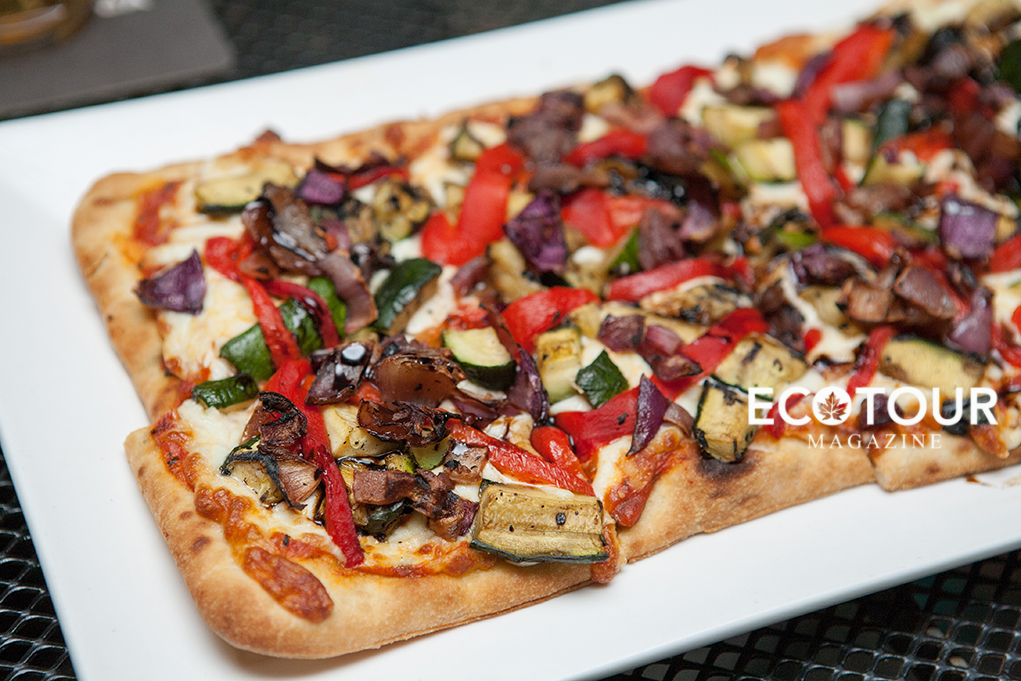