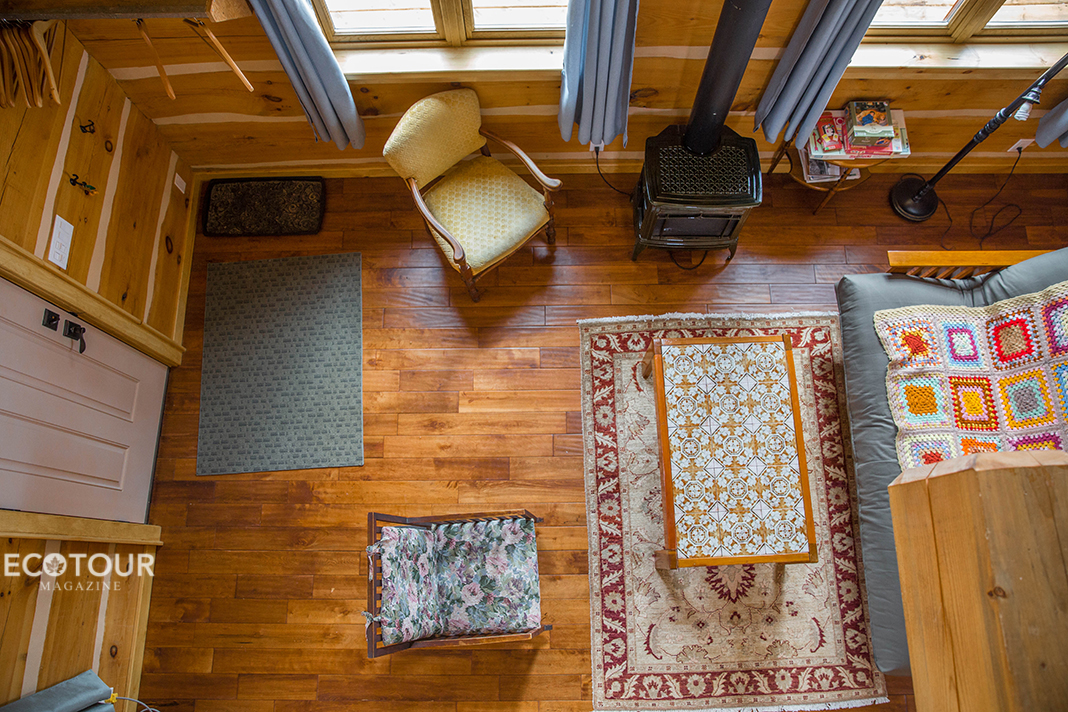 When Jen and Jacques, Owners of the Wolf Den Hostel & Nature Retreat in the Oxtongue Lake Community of Algonquin Park, bought four cabins, they were literally empty shells. There were no roofs, windows, electricity, or plumbing. So Jen and Jacques decided to transform the cabins into fully equipped, comfortable new guest accommodations, constructed with a deep respect for the environment.

Following is an overview of 10 green building features I learned about in-person, while getting a private media tour of Nan & Jack’s, The River Otter, and the Black-Capped Chickadee independent eco-cabins.

Nan & Jack’s was named after Jennifer’s grandparents who were passionate naturalists. “They would identify birds from just a flutter of the corner of their eye, they knew all about trees, they were really remarkable folk, and I think they would have liked it here,” Jen recalled.

This cabin has a queen bedroom, a bathroom off the living area, and a double pull-out couch in the living room, sleeping up to 4, starting at $145/night.

1. Re-purposed wood trim from other projects

Much of the wood trim on this cabin came from Jen’s parents’ 100 year old roof. Rather than scrapping the old wood, she re-used it. 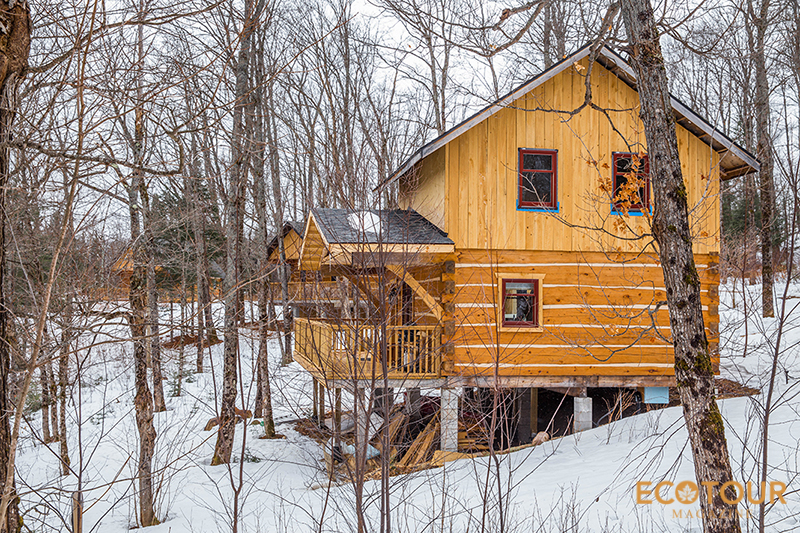 Jen described her paper composite and nut-resin counter tops as “hard as nails.” These natural materials were compressed together to create dense and durable surfaces.

“We like to support the local economy, so we bought our stoves from Barrie, a nearby city, but also to make sure our transportation costs are low,” Jacques commented. 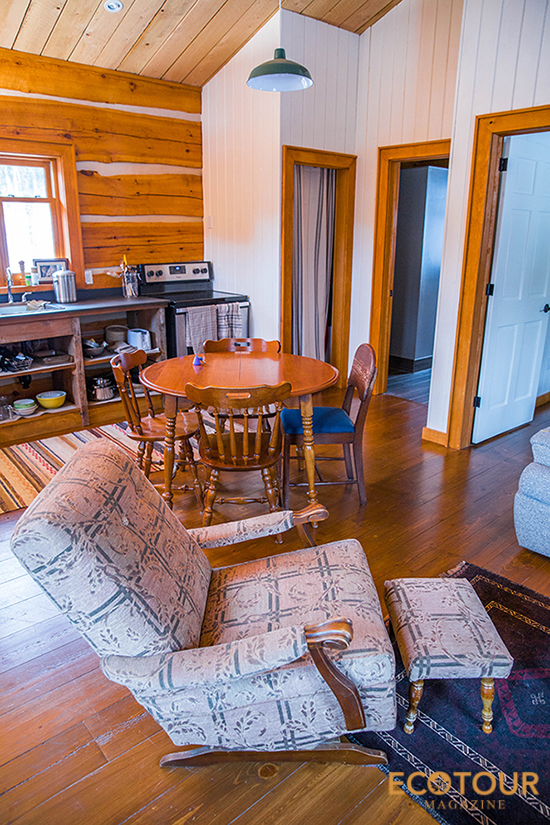 Jen explained, “It’s all about making decision where to source the materials, and what kinds of credentials the buyer has so you can trust your resources.” 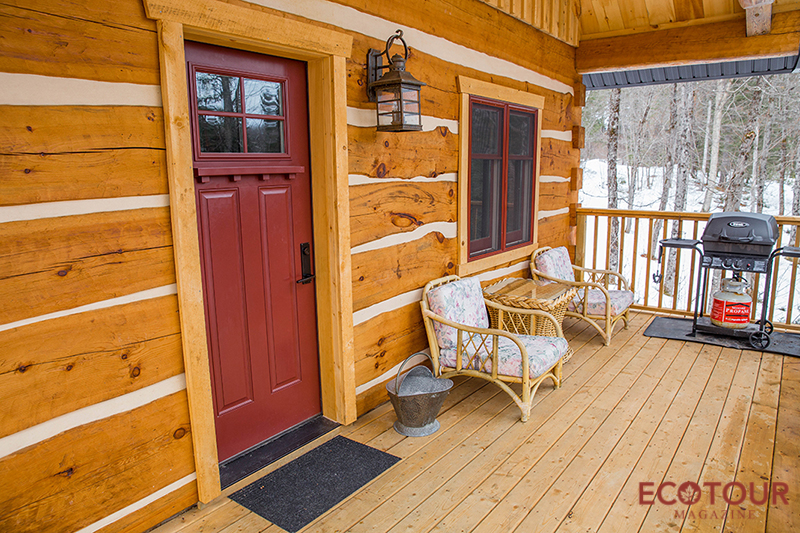 Since logs aren’t the best insulators to keep warmth inside, Jen and Jacques decided to use cellulose for insulation, a wood byproduct from other projects. They skirted the cabin with wood and insulation so it’s lifted off the ground in an old traditional way so that the warmth stays inside the cabin.

“We’ve doubled our insulation value over what Ontario code suggests up in the ceiling by using cellulose.” 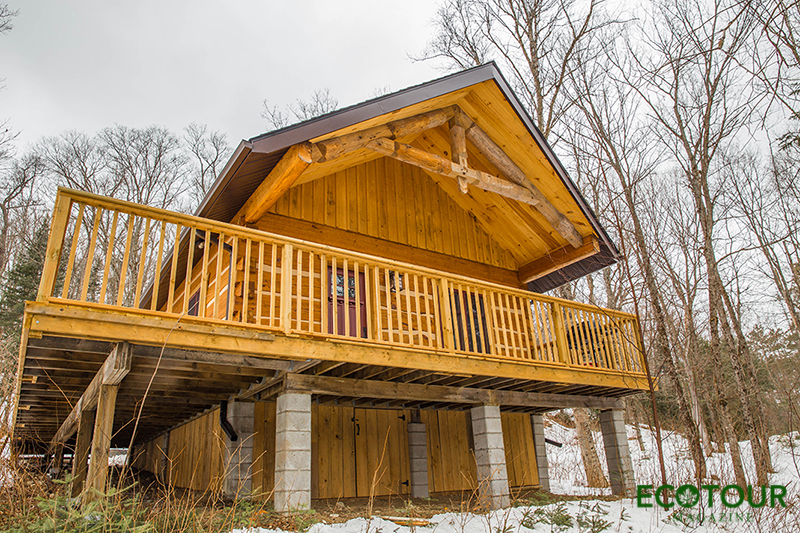 “It’s amazing,” Jen remarked. “When you are painting, you can’t even smell you’ve been putting paint on. There’s one guy who came less than a day from painting, and there were no fumes in the cabin.” 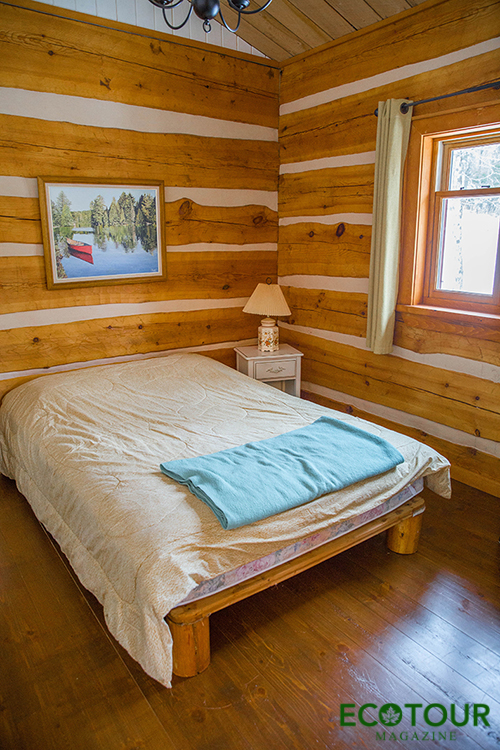 “All of the furniture we have is either gifted and re-loved from friends, or restored.” 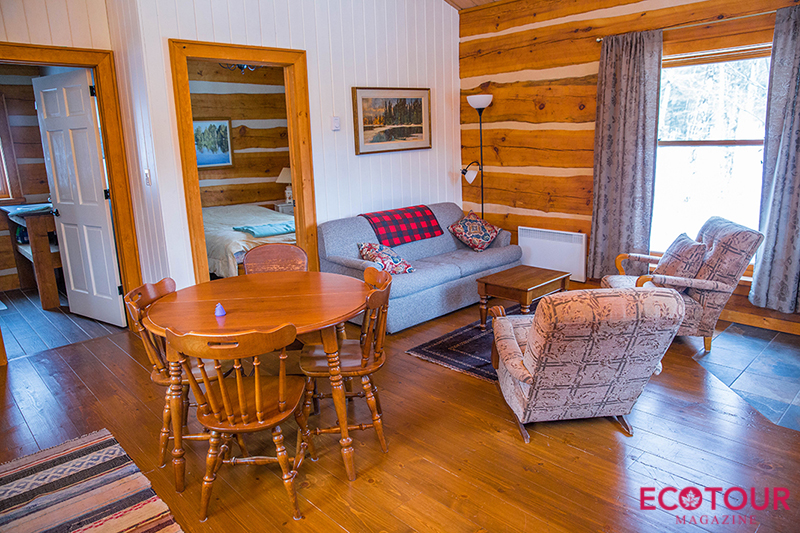 “Red pine is a fast growing and fast populating type of wood that you can use for interiors that will be more rugged than your white pine, but not as rugged as your oaks.” 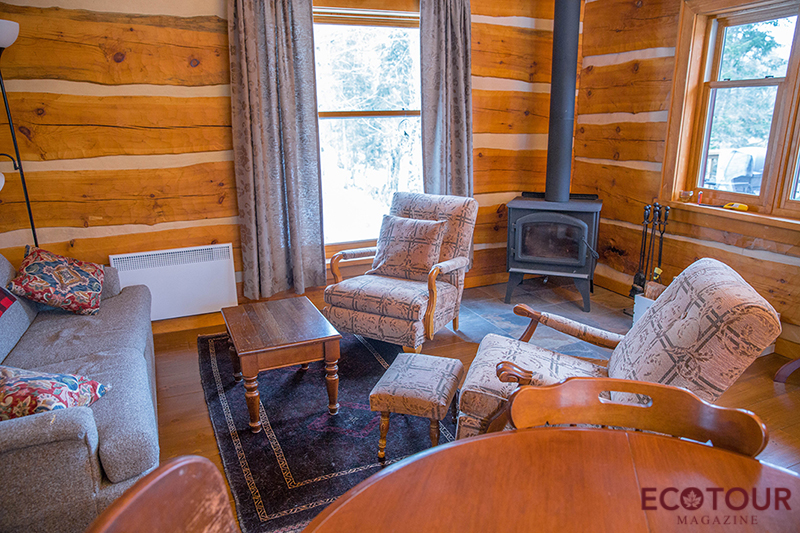 What you should know before visiting Nan & Jacks Cabin

Heating is available – The cabins have a thermostat to control electric heat. Jen and Jacques acknowledge that some folks don’t want to learn all the tricks of the trade, and may just want to get away or read a book.

It could be MORE green – While being completely off the grid would be higher on the spectrum in terms of green design, Jen values the decision to add electric heat as a compromise for the comfort of her guests.

This cabin follows the same general green building principles as Nan & Jacques, but it has more space with a big open loft for larger families, or groups of friends. The open-loft has a double bed and four single beds, overlooking the main living space, with pricing starting at $200/night. 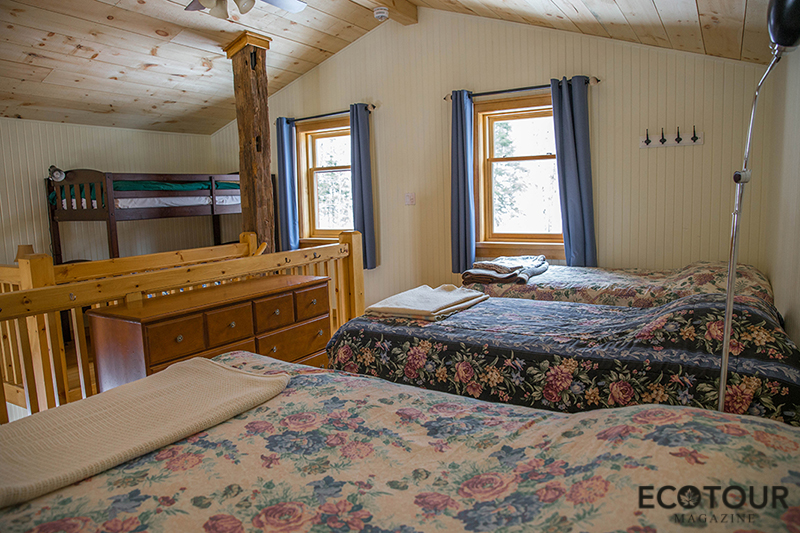 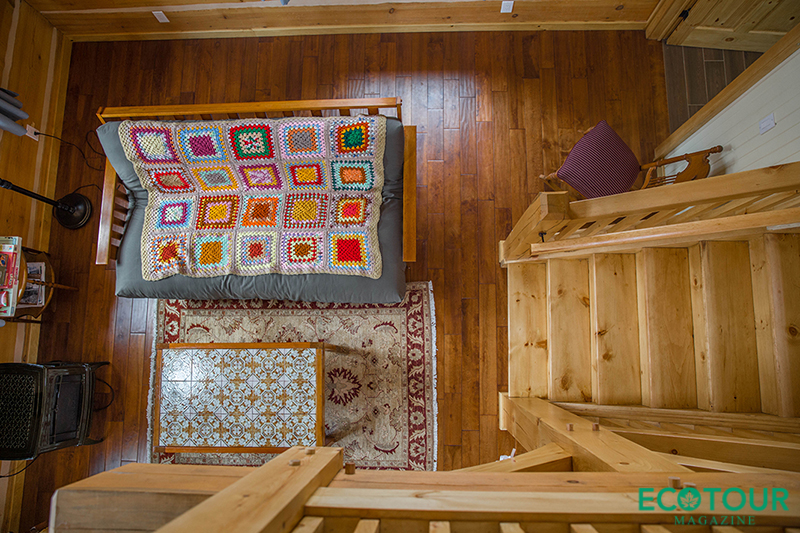 It includes a bathroom, kitchen, dining area, and living space on the main floor, with an open-concept arrangement. A double pullout futon can also be pulled out on the main floor for people who may have difficulty with stairs.

The primary difference between this cabin and Jen and Jacks is that there’s a propane stove for people comfortable using it themselves.”It’s all about finding a compromise each time,” expressed Jen. 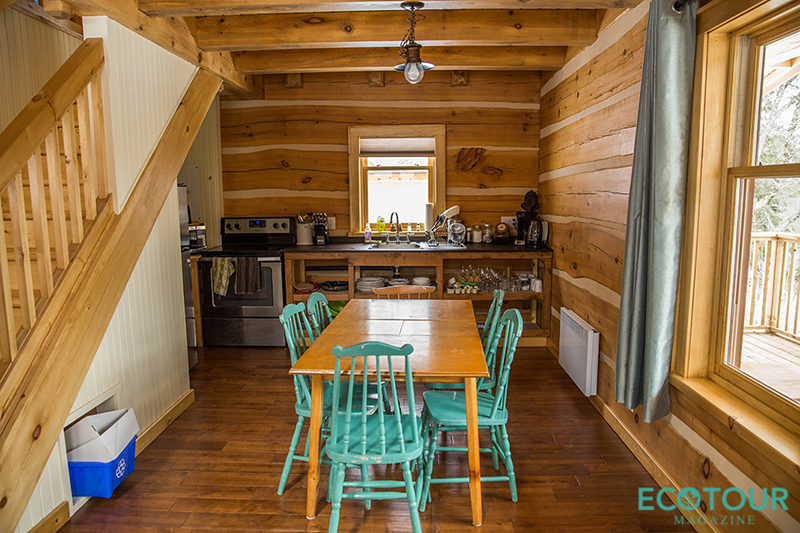 “This is not machine done,” commented Jacques. “We found fine craftsmen who know how to put together a sexy arch. It hasn’t just been processed by Home Depot.”

“It’s worth it to encourage a craft and the money stays locally. We look to support Our business community.” 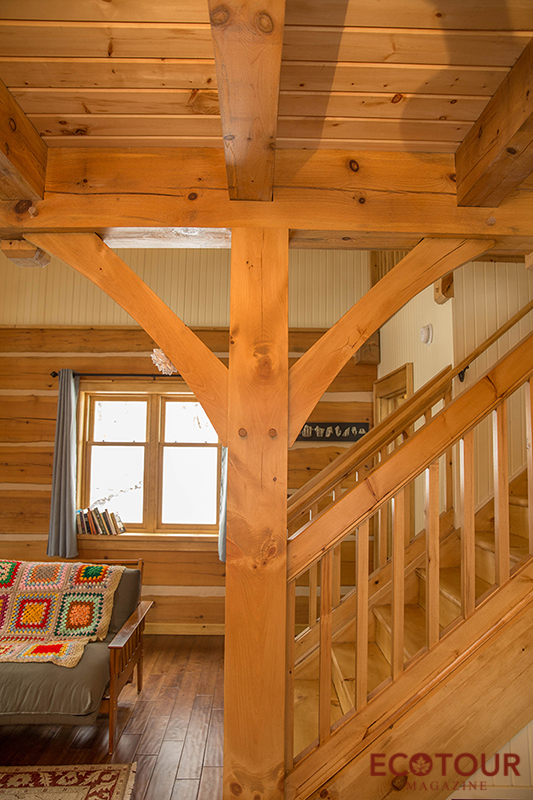 What you should know before visiting The River Otter Cabin:

This cabin is about sharing with less privacy – It has a very open-concept setup. It’s newer than the other cabins, and it’s also a larger and suitable space for hosting special occasions. In fact, this past year, a guest proposed to his fiancé here!

Surrounded by nature – This property was previously abandoned for 10 years to re-establish its greenery after clear cuts by the shoreline, so you can expect to now see abundant shrubbery, birds, and pollinators, like bees and butterflies in the summer.

The Wolf Den also offers a third cabin, which we visited more briefly due to its similarities in design features to the other cabins. It has a big barn door, a skylight in the en-suite bathroom, a double pull-out couch, and a bedroom, fitting a total of up to 4 people. This cabin starts at $145/night. 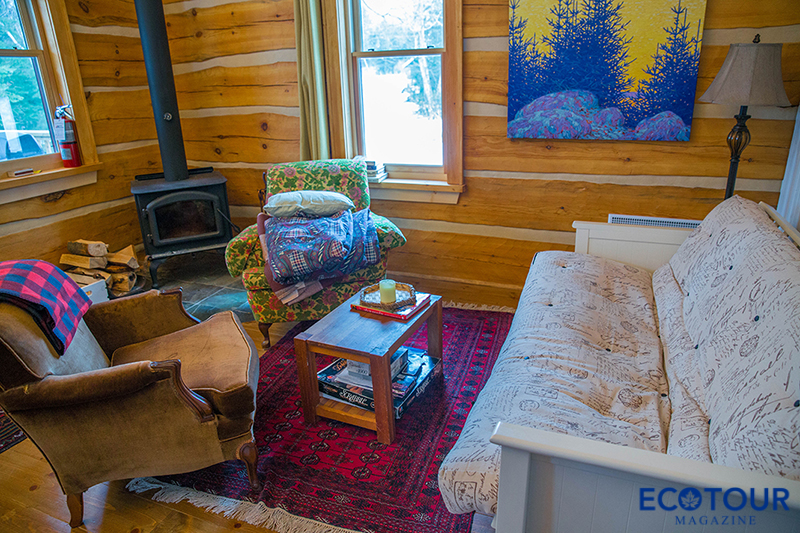 In terms of the area, the cabins are nestled between pine and oak trees draping over Oxtongue river – the same river where Tom Thompson of the Group of Seven is believed to have made his famous painting, “Northern River.” The National Gallery of Canada even has a plaque that was awarded to the local Oxtongue Lake community to put up, designating their land as a landmark in Canadian art history. 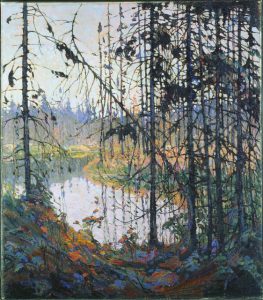 While our media team didn’t sleep in any of the independent eco-cabins, I gained an in-person understanding of the main features from our tour. Based on what I saw, I would recommend the cabins to anyone looking for private accommodations that balance comfort with an intro to green living, perfect for a getaway for friends or family.

If your more adventurous, however, there are a lot of recreational activities where you can further explore the Algonquin ecosystem, with bicycle and boat rentals in the summer, and snowshoe, ski, and fat bike rentals in the winter time from the Wolf Den’s friends at Algonquin Outfitters, Algonquin Adventure Tours, and Snow Forest Adventures.

The Wolf Den Hostel & Nature Retreat aims to provide affordable accommodation that promotes both community and a connection with nature. They are located just 9km outside the West Gate of Ontario’s world famous Algonquin Park.

Remember that sharing is caring, and each article shared helps support our cause to raise awareness of eco-minded travel opportunities in Canada! 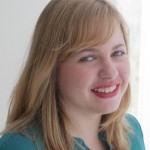 As Editor-in-Chief of Ecotour Magazine, Debra is excited to bring her over 7 years of experience in communications, content creation, and journalism, to help share Canadian Ecotourism stories with you. Debra has a Degree in Environment from the University of Toronto, a Graduate Certificate in Corporate Communications from Seneca College, and most recently studied Travel Writing at George Brown College. She was born and raised in Toronto, Canada. 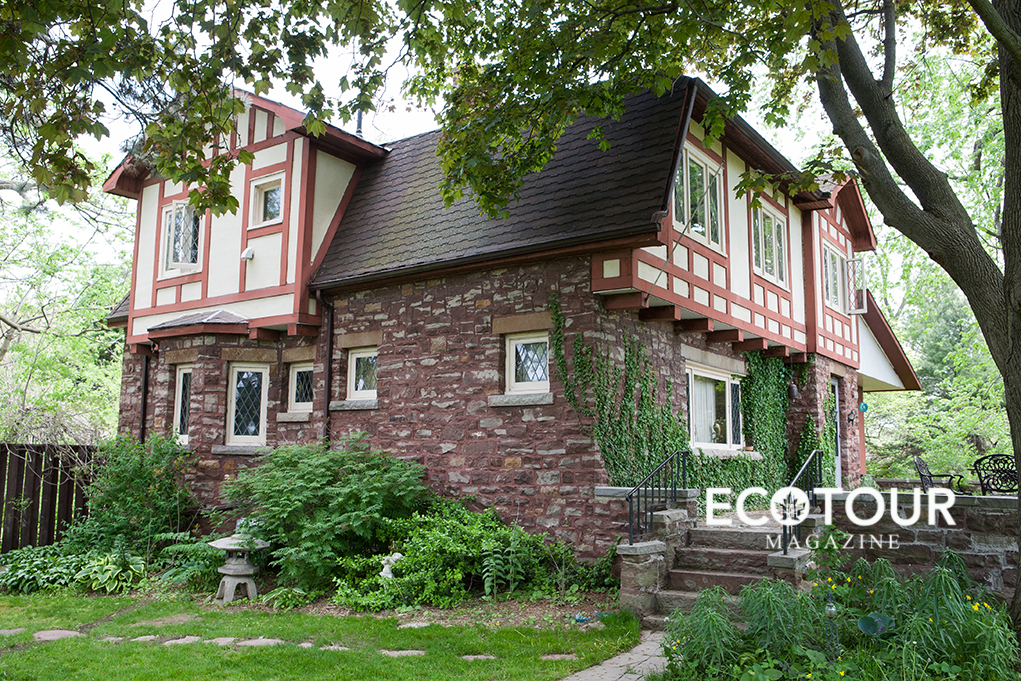 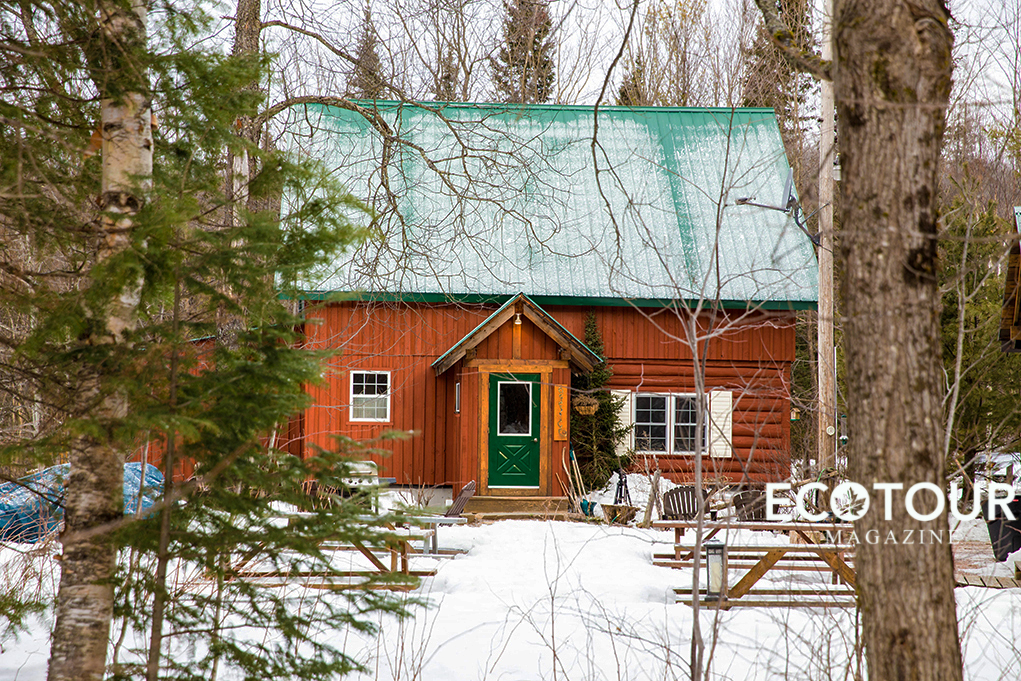 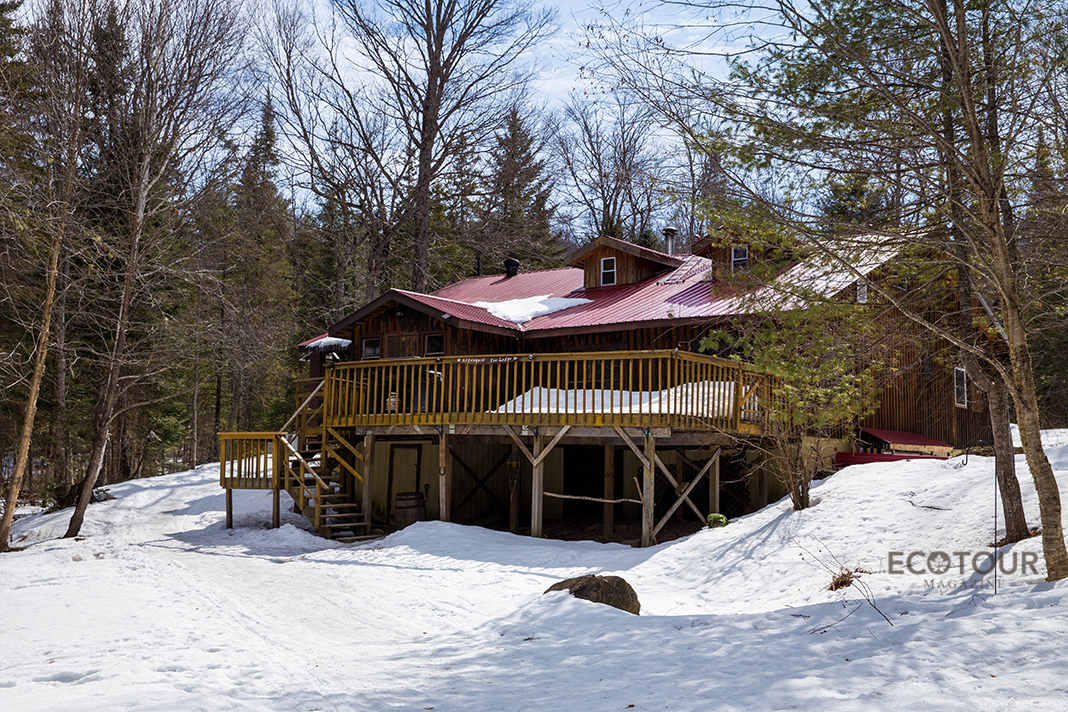